Bharatpur - Drama over the Kill 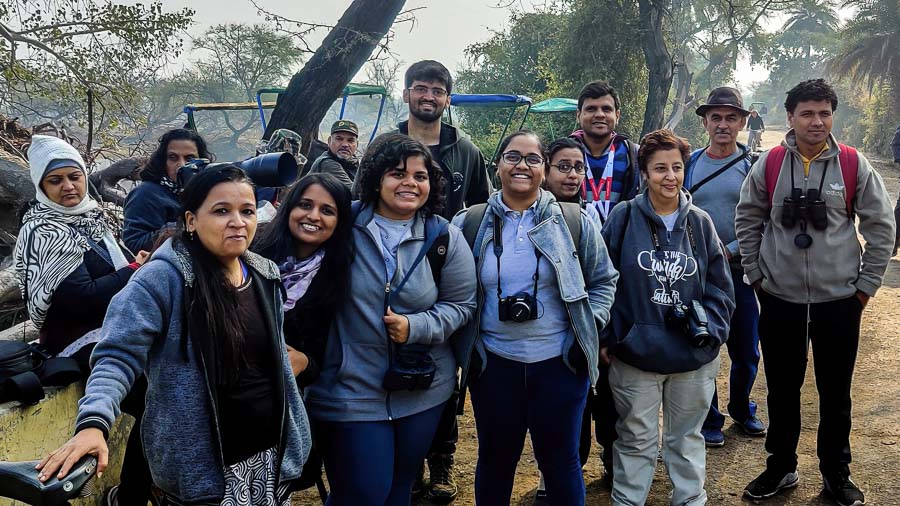 In January, we were in Bharatpur as part of the BNHS (Bombay Natural History Society) Camp of the Biodiversity course. This was our 3rd day in Bharatpur. We had covered various areas of the park and our total species count was looking good too.

But we had not seen the Sarus Cranes yet and that was a major attraction for many of us (luckily, I had managed to get good photos of the Sarus pair in Nal sarovar earlier in December).

It was about 4pm, when our guides (and the cycle-rickshaw drivers) suggested a spot for the Sarus sighting. It was on a smaller road from the “Sapan Mori” point and it wasn’t a cyclable road. We all had to walk quite some distance. Our entire group was very enthusiastic and we decided to go ahead.

We got clear instructions about the spot (and from there where to look for the birds) and started walking. On the way we kept seeing various birds. The eagles (Steppe, Crested-serpent and greater spotted), variety of ducks including a pair of Brahminy ducks, wagtails, parakeets, and many others. We even saw a mother-fawn pair of Spotted deer. 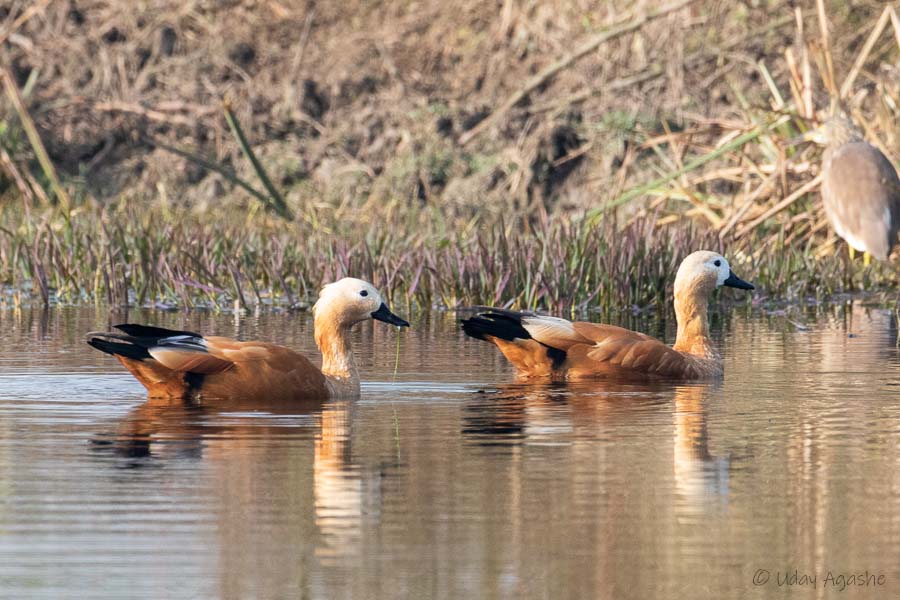 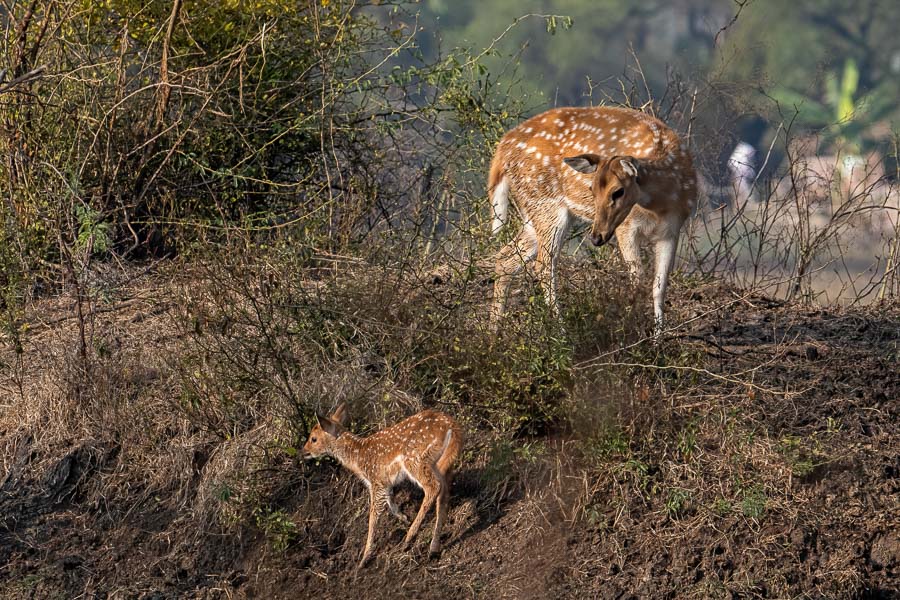 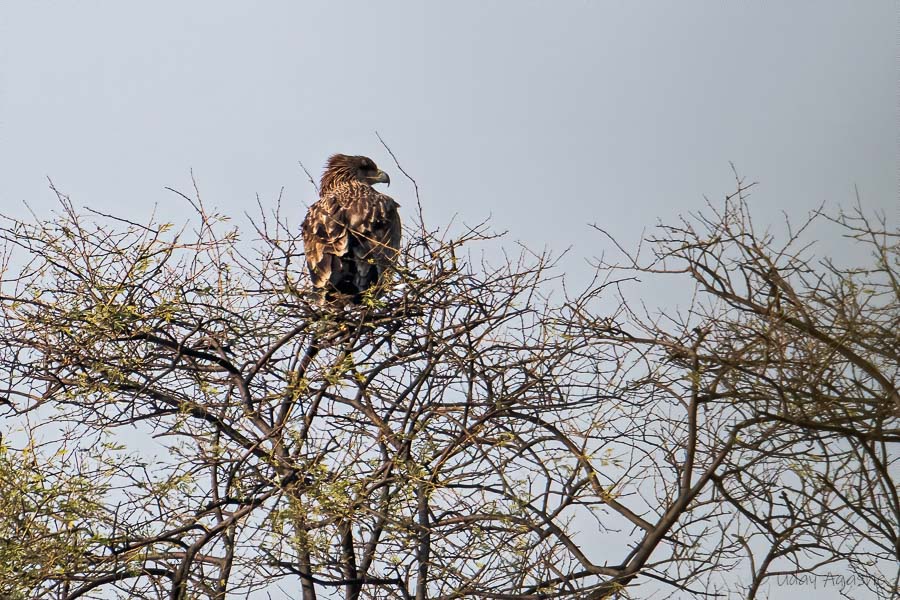 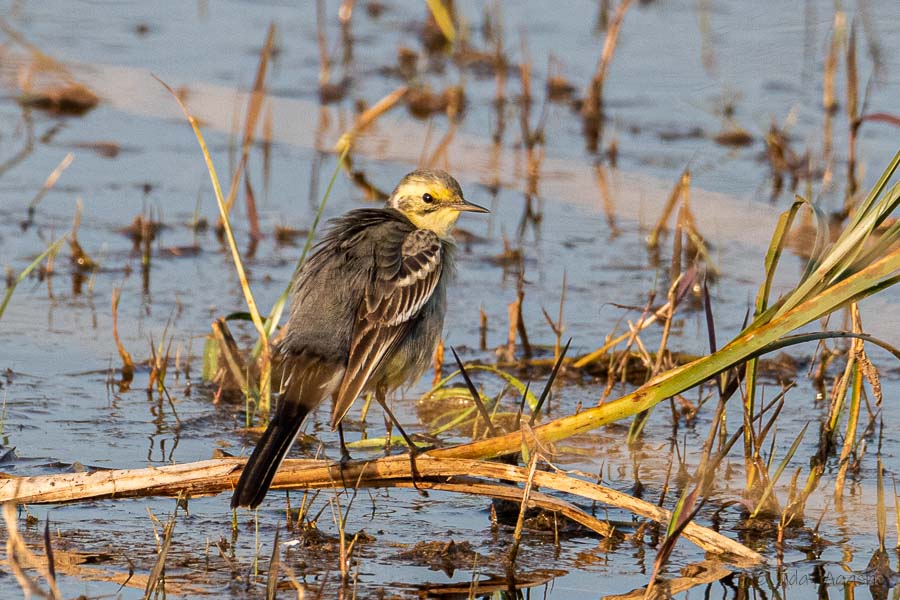 It took us about 40 minutes to reach near the end of that road (from where the sarus should be visible) but there was no sign of the elusive birds. One of us (Vaishali) had hired a bicycle and although the cycle-rickshaws were not allowed, we could cycle on the roads. Then Adil volunteered to search for one small adjoining road (in the hope that the birds may have strayed somewhere further down).

Light had already started fading so we had to decide something quickly. Besides that, some of us had the late evening train to catch. So, they had to be back to hotel by 6/6:30 anyway.

Little later Adil came back hurriedly and asked us to follow him. We obviously thought he had seen the Sarus cranes.


Jackals on the scene

Here there was a very small mud-path we had to walk on. Just enough for two people to walk together. We all were following Adil and then suddenly on the right we saw a jackal running away, followed by another one. We quickly pointed our cameras and took a few shots.

Little further we could see a small group of photographers waiting with their cameras, that’s when we realized that the Jackals were feeding on a kill and our loud approach (how silent can a group of 10+ people be) had driven them away. So, the jackals we saw running, were disturbed because of us!!

Further scan of the area and we could see the kill as well. It was probably a sambar deer (there was some confusion about the exact specie that was killed, but let’s assume it was sambar anyway).

We all then decided to wait there (hoping that the jackals will be back). As we were settling in, we could also see a vulture waiting for its turn on a near-by tree. Within a minute of so, it was joined by a Steppe eagle (that was the only tall tree in the vicinity and it was conveniently located to keep an eye on the carcass; naturally both raptors decided to perch on it). 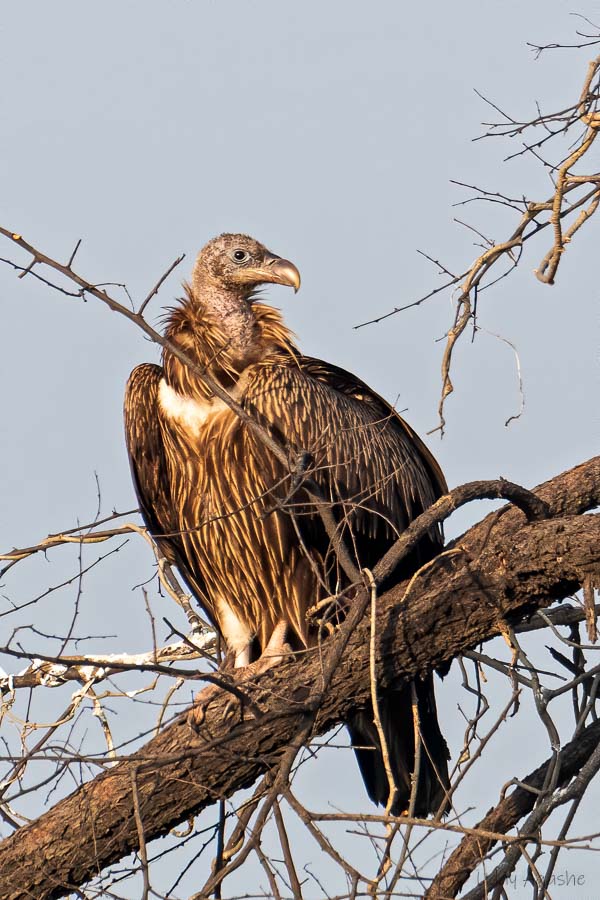 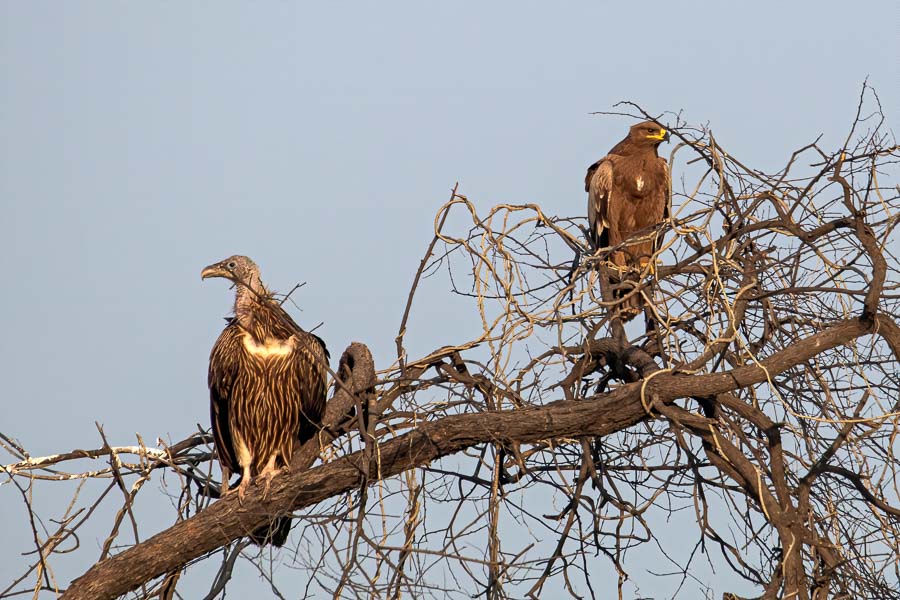 Our wait wasn’t long. Within about 10 minutes one of the Jackals was back. It approached very cautiously till it reached the spot. We quickly raised the cameras. While we were watching the jackal, we saw a white bird flying towards it, it passed jackals and flew further behind us. We could not recognize it but I went ahead with few quick shots anyway. It turned out to be the “Hen Harrier”. An uncommon sighting and a lifer for most of us. 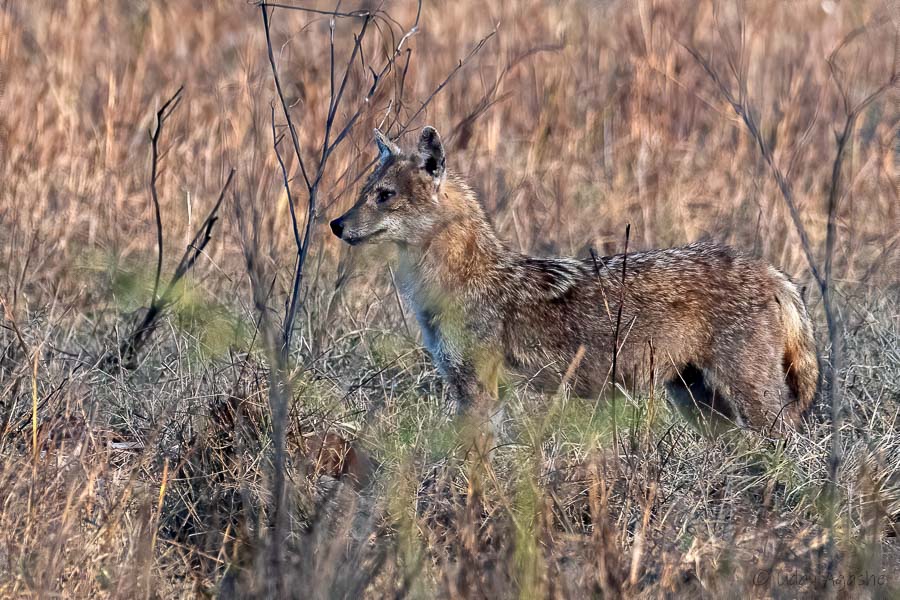 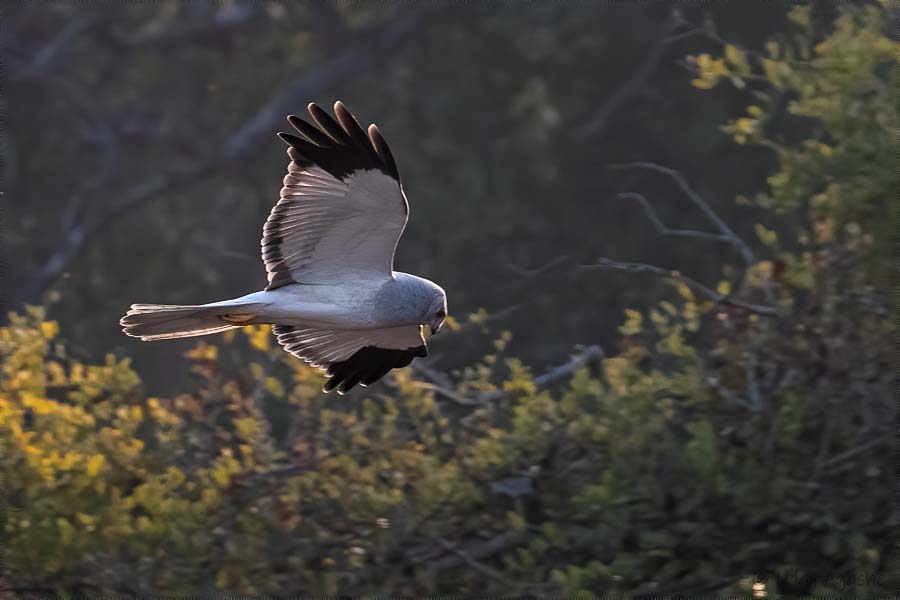 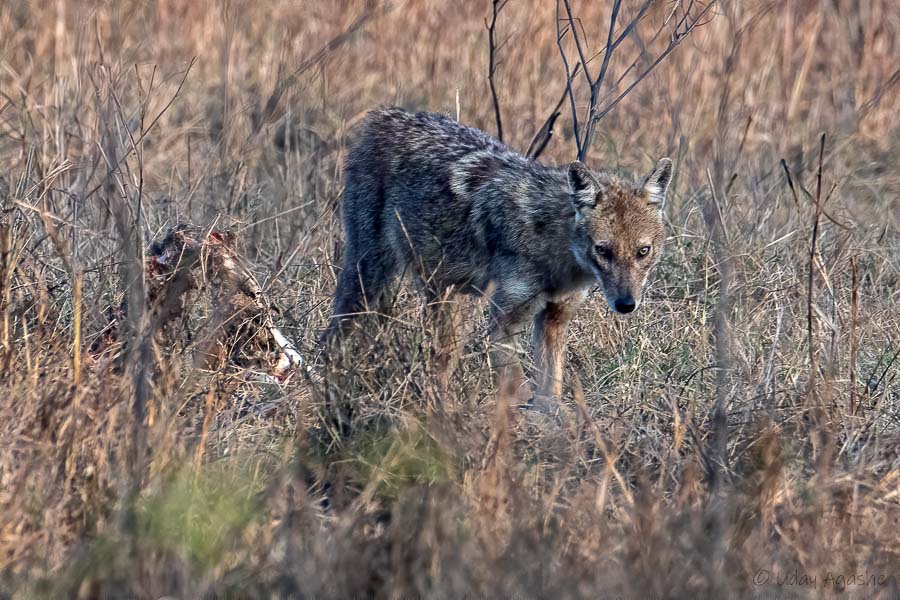 By then it was 5pm and some of us decided to go back (to be in time to catch their evening train). As they were moving back, the jackal once again got alerted and ran away.

Eagle on the kill

This gave a window of opportunity to the Eagle. It decided to take the chance and swooped down on the carcass. It was also joined by couple of opportunistic crows (and the eagle did not mind their presence). The place definitely was becoming famous by now. When we looked little farther away, a single tree was occupied by 5 raptors (mix of eagles, vultures). They also must have come to assess their chances. 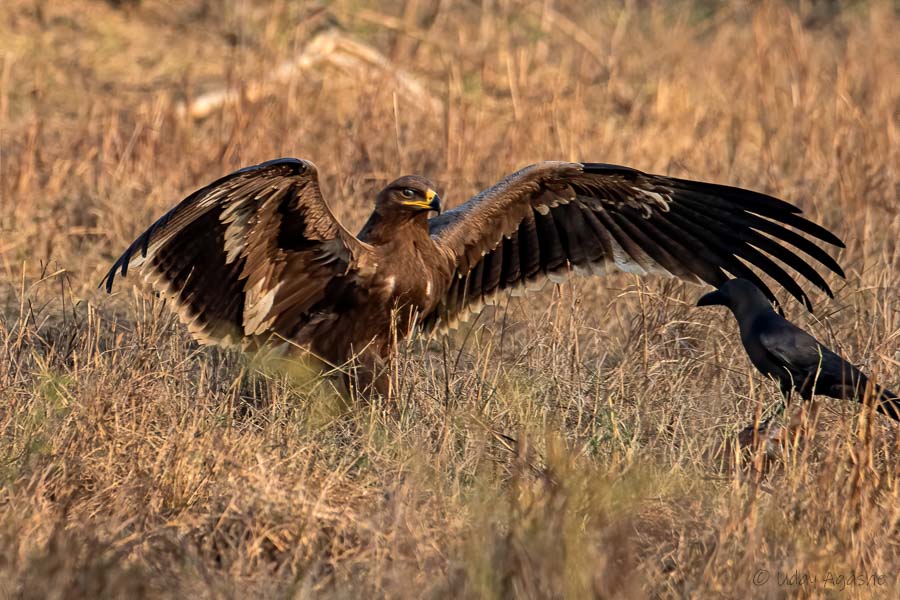 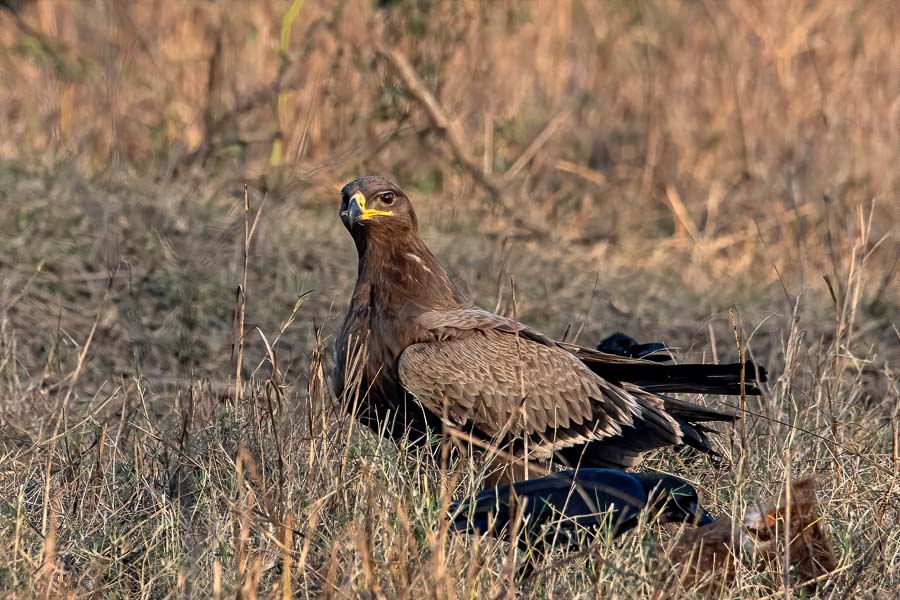 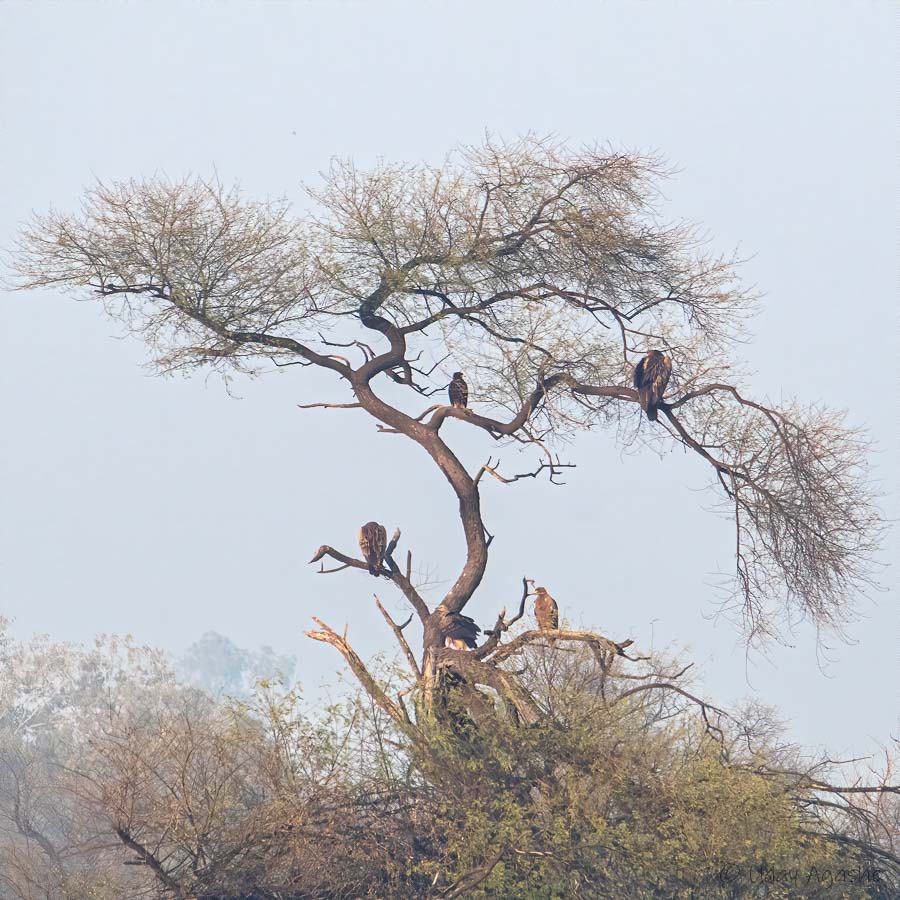 The guys who had returned back had got some news about Sarus sighting (near the main road itself). On hearing this, part of our remaining group got interested in seeing the Sarus and decided to go back, now only 3 of us (and the other group that was already there) remained.

As they were moving back, the eagle got disturbed and went back to the tree. 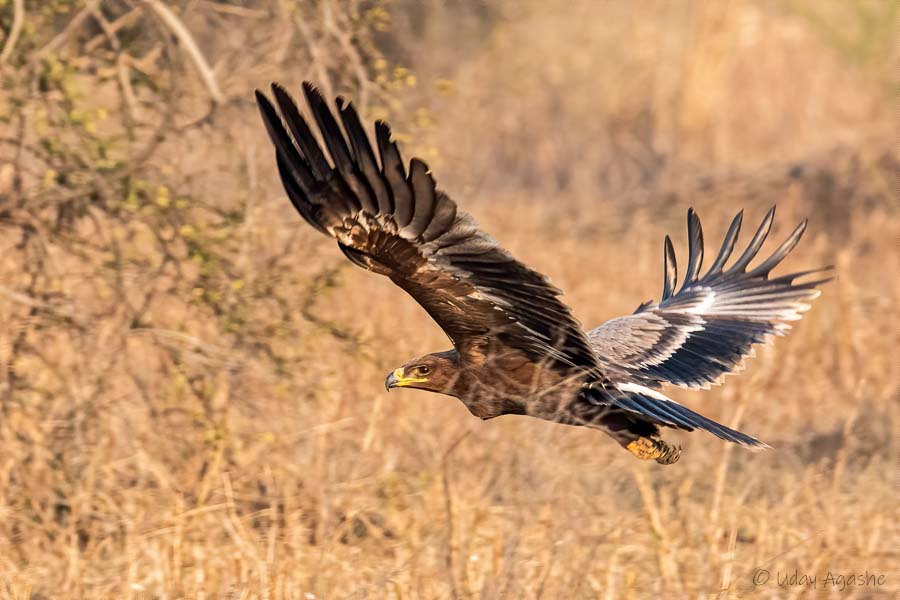 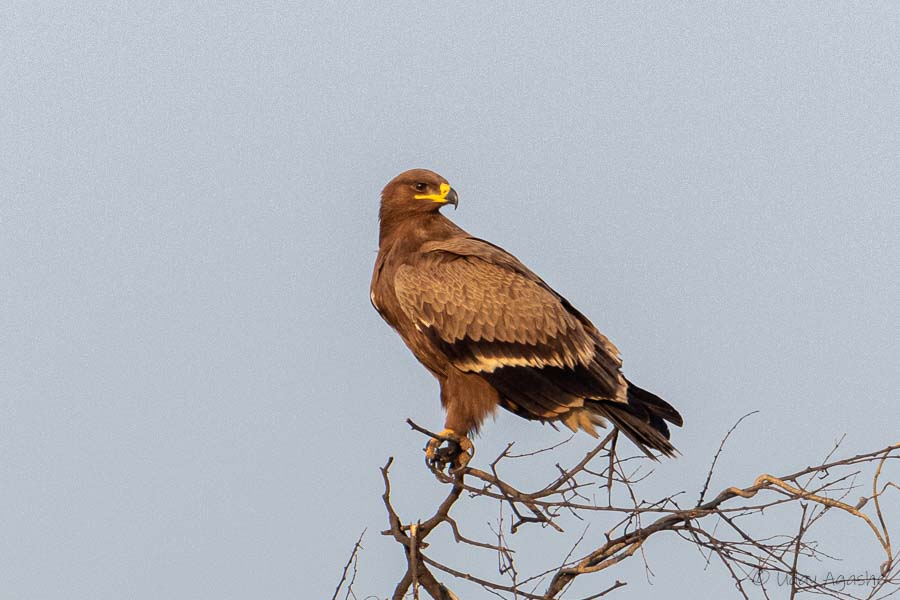 Back to the tree

Once again, we waited patiently. The jackals did not disappoint us, they promptly came back at the kill. 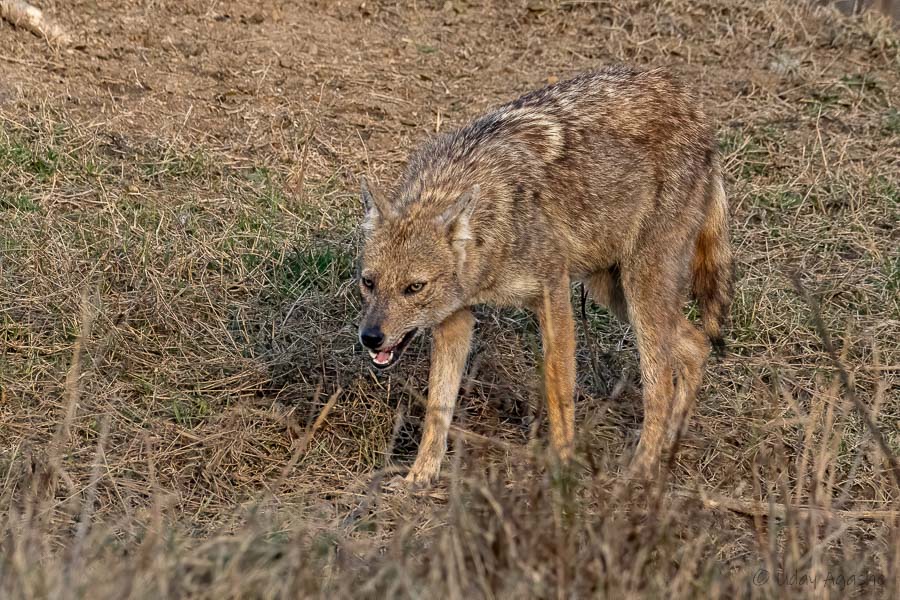 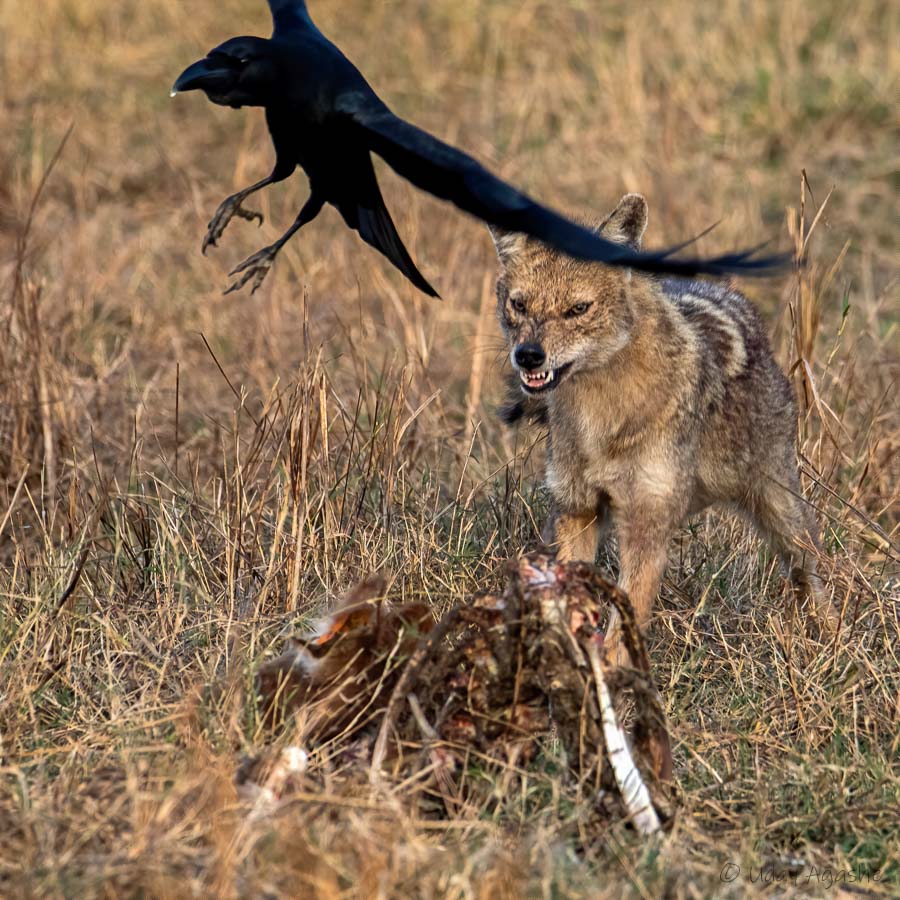 This time the jackals could eat undisturbed as we all were photographing them without making any noise/movements. But now, there was an unexpected intruder.

We saw a wild-boar approaching the kill and within seconds realized it was a small group (the others were following the leader). To our surprise, the jackal stood no chance in front of them, and decided to move away. It was little confused that time as it’s approach path (from where it was coming back to the kill every time) was blocked by the boars and he could not run towards us (obviously because the jackal was aware of our presence). Within a fraction of second, it decided its retreat and then moved towards our left.

Now it was time for the boars to have their mouthful. The boars are another opportunistic predator. They cannot make any kill themselves but when available, they just gorge on the meat. 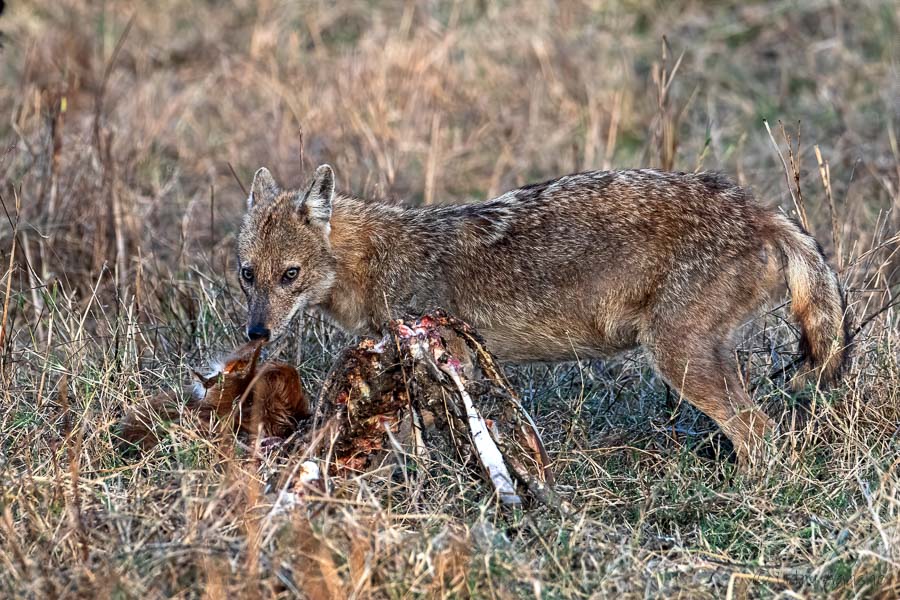 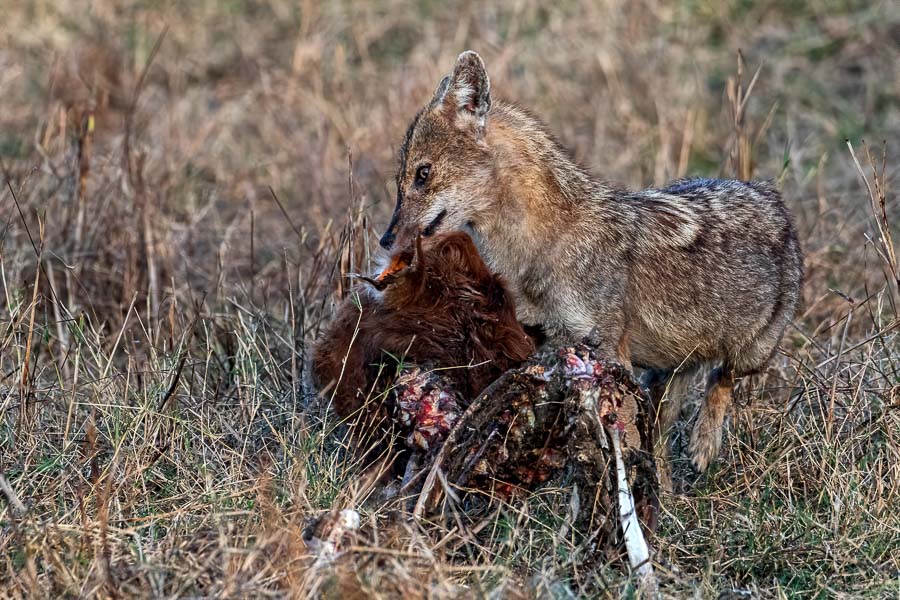 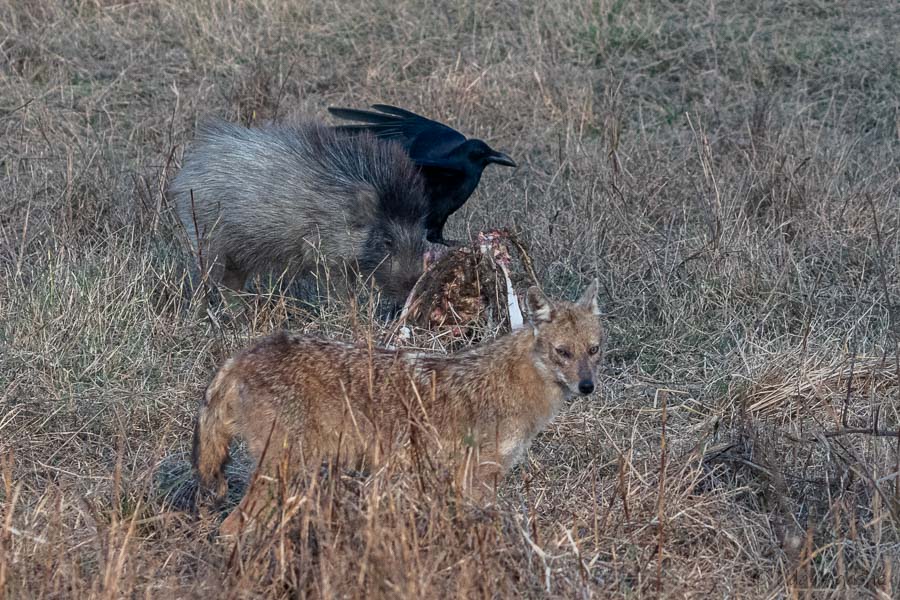 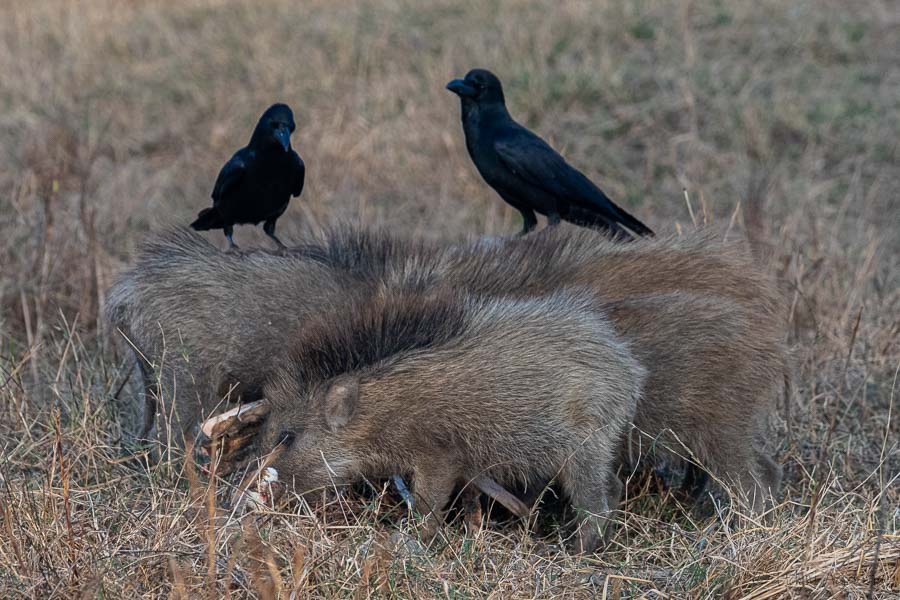 By now, the other group of photographers also decided to leave. With their movement, the boars got disturbed.

Once again, we waited for the jackals to come back (only 3 of us remained on the scene now). But for some time, there was no movement. Even the raptors didn’t move. So we though of walking back. In that process we had now walked very close to the spot. Suddenly we realized the jackals were coming back. We stopped where we were. Adil I think was sitting down and me & Sameer were standing, we remained unmoved, just adjusted our cameras (but no movement otherwise). This time I even managed to get the video of the jackal.

The drama was still not over! Within a few minutes, a small boar appeared again (much smaller in size compared to the earlier adult), but even he bullied the jackal to take control of the carcass.

By now it was getting late and also we thought our proximity is disturbing the animals, so we decided to move. With our movement, the boar ran away and the field was once again open for all.

On our way back, we again saw 2 jackals cautiously approaching the kill. We just hoped they will be able to eat without any further disturbance. Or whoever else that was lucky. It is like the saying in Hindi “दाने दाने पे लिखा हैं खाने वाले का नाम”…

By the way, just for records, even we managed to see the Sarus Cranes on our way back (the Sarus cranes were walking away, far from us).


I will be more than happy to answer any query about this tour. You can either put a comment down here or write to me on “uday.agashe@gmail.com”.