Capturing the Milky-Way - May'18 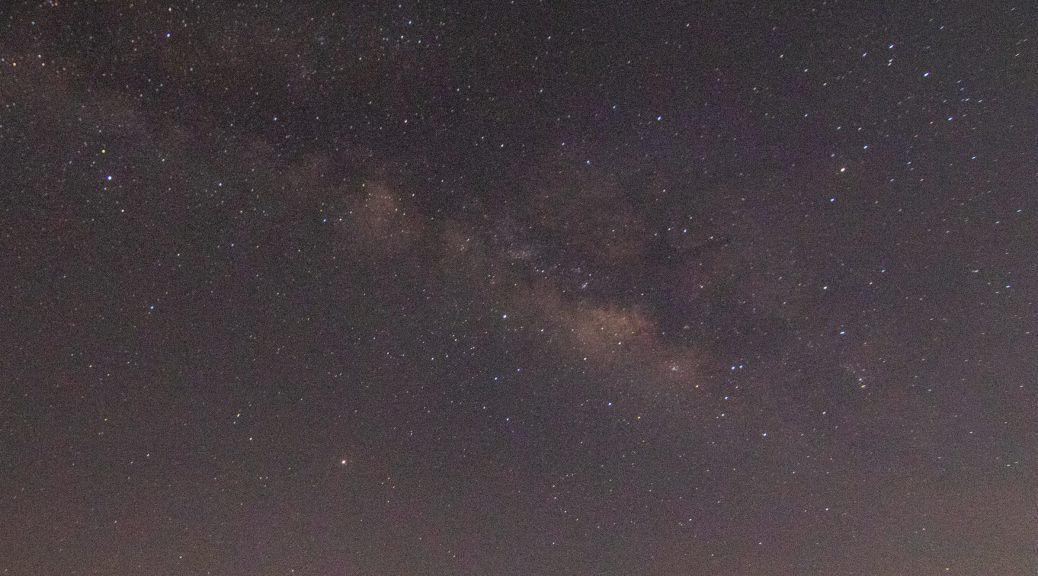 Ever since I have been interested in photography, this is one area where I had no exposure so far. Have been seeing the pictures of others showing nicely lit stars bunched together forming nice pattern.


Being a physics student, I was aware of the fact that Earth is part of the “Milky Way” galaxy and that, the galaxy is a hugely (how huge, you just cannot imagine) large mass of stars and solar-systems that is moving together in the even larger universe.Just to give an idea, the milky-way is spread over a diameter of more than 100,000 light years (and 1 light year is “9,460,730,472,580” kms), that’s a staggeringly large number even to imagine.

Although most of us would have not observed it, the milky-way is visible even to the necked eye in the night sky provided you are far-away from any earthen light and that the sky is devoid of moon-light. So the best chance is in some remote area somewhere in the mountains on a no-moon night (hence, not many of us are likely to have experienced that).

Until Galileo’s time, this band-of-light was a complete mystery. Galileo resolved it as individual stars that are so far away that we cannot distinguish them individually.

But that’s enough of a detour, let’s get back to the main story. That day (in May’18), we were in Kumbhargaon (Bhigawan) for our usual birding. And since that is a relatively remote place from nearby towns (plus a no-moon night), we could do this night photography.

This idea was mooted by Yuwaraj and Bhaskar. Although they are seasoned campaigners and have done this multiple times earlier, their previous attempt in Bhigawan, a month prior was unsuccessful. Largely due to the cloudy sky that day (yes, that is another dampener for the night photography besides the light pollution). That time, I did not attempt it and had decided to sleep peacefully instead, in hindsight that turned-out to be a good decision though.

Anyway, this time we hoped for better. With the help of suitable mobile apps, we had roughly identified the direction in which it could be visible and also the time (between 1:30am and 4:30am) at which it would appear in the night sky.

As usual, we had finished out night photography trail before mid-night and thought of catching up on some sleep, Alarm was set for 1:30am (no need to get up earlier, our equipment were anyway ready and we just had to get up and go out). My main worry was not carrying a wide-angle lens that day (since you want to cover as much of the sky as possible, the zoom lenses aren’t of much use here). But that problem was solved by Esmail bhai. He was not planning to join us and willingly lent his lens for this shoot.

We started at sharp 1:30. Our idea was to go on the terrace of the home-stay location where we were staying. There were few youngsters (a group of TCSers were also staying in that home-stay that night) who were also interested in this and were already on the terrace. They informed us that we have to change the location as there was some light pollution that would be a hindrance. Then we thought of walking some distance away from the village to get a better view. But before that, we actually tried taking some test photos.

Under Bhaskar and Yuwaraj’s able guidance, I took those few shots (since I was carrying the tripod and the camera was readily mounted on it). This was little different experience. In that pitch dark condition finding the camera adjustment buttons itself was a big task. I had to keep the camera shutter on for 30 seconds, make changes to ISO setting as well as aperture. But these first 1-2 photos did reveal that there was a faint light-band that was visible in the image and its direction in the sky matched with the mobile-app direction for the milky-way. That was the confirmation we needed.

All of us (Yuwaraj, Bhaskar, Onkar and myself PLUS the other guys) then marched on the road. As expected, the local dogs detested this intrusion on their privacy and made their displeasure abundantly clear. But we were in a big group, so we moved on without bothering about this small disturbance.

We walked for about 15-20 minutes to be sufficiently away from the lights and kind of camped on the road (it was a local walk-way, not a tar or concrete road). All tripods and cameras were pointing roughly in the direction that we thought to be right (unfortunately, the milky-way was not visible to the naked-eye that day). Everyone did the settings as per expert guidance and started clicking the pictures. Since there was very little visibility, every now and then we were warning others not to trip on the tripod legs. Two dogs had decided to accompany us quietly and we had to also ensure we don’t accidentally step on them. And since the land below was completely uneven, we had to step carefully while moving about.

Here we had a small learning. Sometimes the best experienced guys could also ignore simple steps. It so happened that for the first 10 minutes, Bhaskar was frantically struggling with his camera/settings. He had the best camera gear among all and is also a very knowledgeable person at handling it. But despite of all his attempts, his photos were completely black. There was not even a single star or light visible. Even Yuwaraj looked into the setting and confirmed that everything is in order, but the output wasn’t showing. In that utterly confusing situation, I raised a silly question “have you removed the lens cap?”, and that actually was the reason!! We all laughed about it but in that light, we just couldn’t notice that earlier. We were handling our cameras purely based on our judgement/experience (as none of the camera controls were visible) so such lapses are likely to happen.

The initial pictures were only of the sky (as seen below). 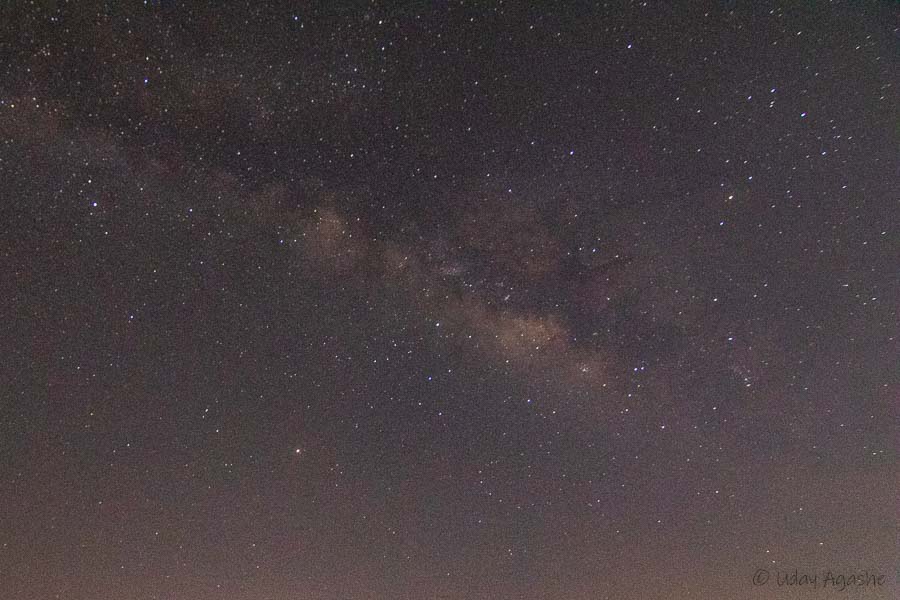 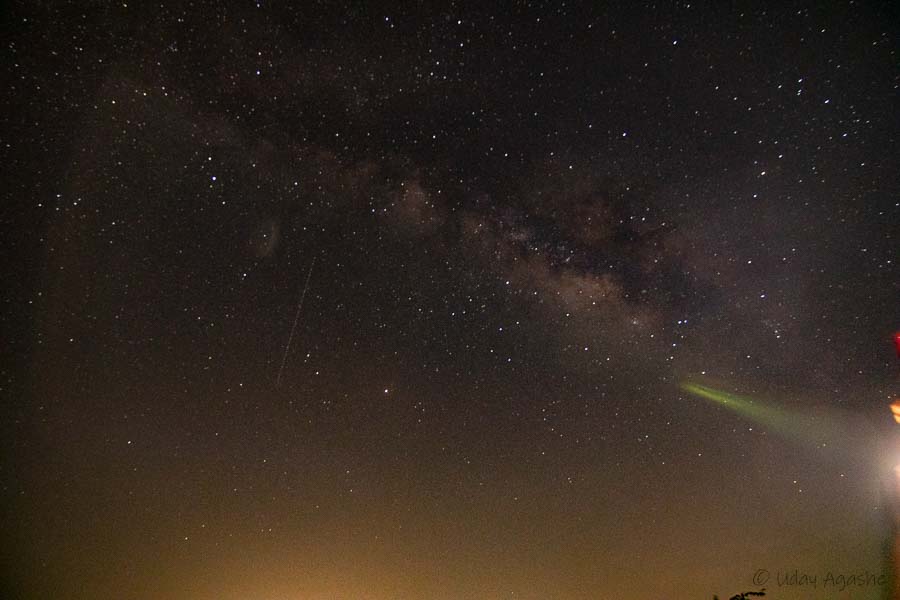 After that we thought of being more innovative about the composition. For me everything was first time, so I just decided to go along with the group here.

Normally when one takes the milky-way photos, they show some well-lit object near the ground along with the stars. But since we were to keep the camera shutter open for a long time (30 seconds is really long period, most of our photos are taken within a fraction of a second), any lit object near ground would be completely over-exposed. So guys became more and more innovative about it.

Yuwaraj graciously opted to be the volunteer (for him the situation wasn’t new as he has been in photography for more than 25 years now and has many such photographs). He was to hold a torch light pointed towards the milky-way. But the torch light was to be shown only towards the last 5 seconds of the exposure (and not for the entire duration, else that would have looked too bright and would have spoilt the picture).

To achieve this, we all were to start shooting simultaneously, someone was keeping a tab on watch, exactly after 25 seconds of exposure, he would give a shout and then Yuwaraj would put the torch on. There were multiple such attempts as not everyone started at the same time or somebody stood in front of their camera, etc. Yuwaraj just kept on showing the torch on every request.

In between, there was another composition where one of us was showing light on Yuwaraj (from behind) so that even his frame would be visible in the picture. As can be seen in one of the pictures, one of the dogs also decided to remain in the frame.

All that circus went on till about 3:30am after which we decided to call it a day (or night) and returned back (we also had to get up early and do our morning boat-ride for birding).

In the end, it turned out to be a very nice and unique outing. My photos are off course very amateurish compared to the others but I enjoyed the overall experience and would hopefully be better prepared next time.

Hope you liked the narrative, here are some of the pictures to accompany the writing. 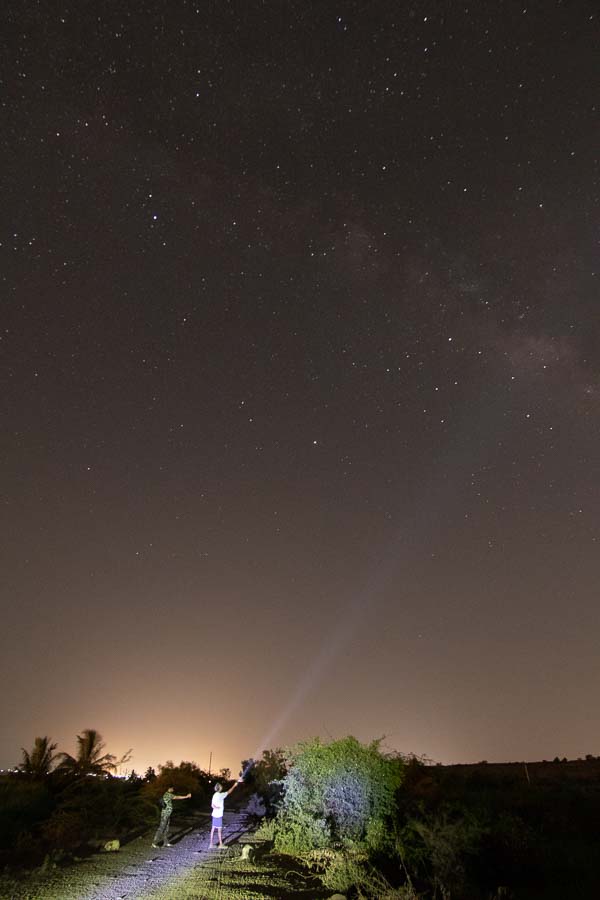 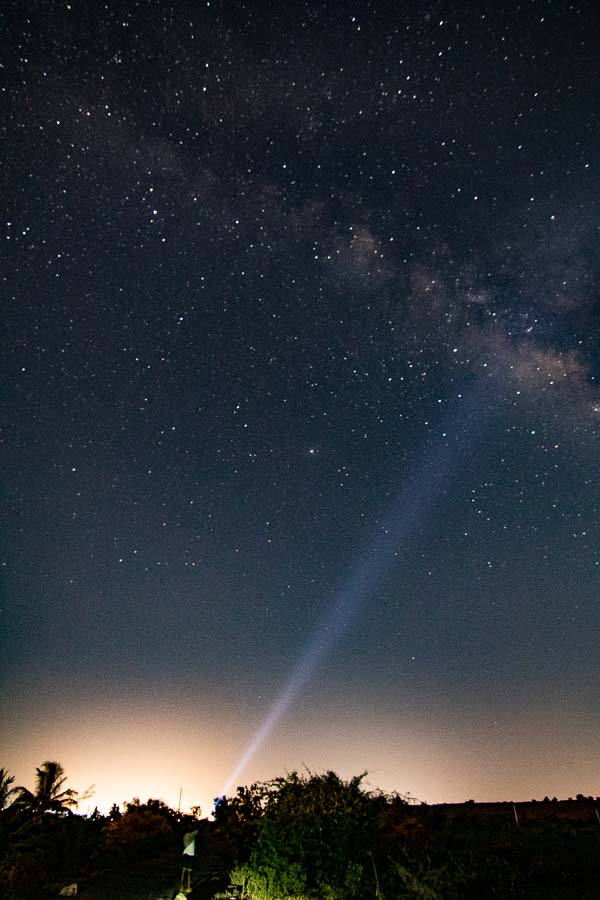